Before this end-of-month fundraising deadline comes to a close Saturday at midnight, we’re aiming to generate as many individual donations as possible. But we’re facing one problem: we are currently 21,511 donations short of where we landed at the end of July. So we’re hoping you can help us catch up. This campaign is made possible by hundreds of thousands of people chipping in what they can, when they can. That is the only way we will be able to build the organization required to win.

As you know, Bernie doesn’t go around the country collecting max-out checks from wealthy campaign contributors. We’re doing things differently, funding this campaign through a record number of contributions. 2.5 million and counting. That is why your donation is so important.

This campaign is building an unprecedented grassroots movement capable of defeating Donald Trump and transforming our country. Make a contribution today so we can bring millions of people together and win this primary.

As many of you know, it was as a student at the University of Chicago when I became involved with an organization called the Congress of Racial Equality (CORE), one of the leading civil rights groups of that period.

I share that because it was that experience that taught me a very important lesson. And that is whether the struggle is against racism, or sexism, or homophobia, or corporate greed, or environmental devastation, or war and militarism or religious bigotry — real change never takes place from the top on down.

Real change ALWAYS takes place from the bottom up when people at the grassroots level stand up and fight back.

And today, it is up to all of us to create an unprecedented grassroots movement to stand up to the greed of the health insurance and drug companies, the fossil fuel industry, the military and prison industrial complex and to create a government and an economy that works for ALL OF US and not just the 1 percent.

So far, there is only one campaign that has shown it has the ability to build and organize the kind of movement to take on Donald Trump and the billionaire class.

That campaign is ours.

On issue after issue, the people are on our side. We just need to bring them out to vote.

You can play a large part in that effort, by hosting a Plan to Win party between September 18th and 24th. So I am asking:

Will you add your name to say that you will host a Plan to Win event during our campaign’s week of action between the days of September 18th to the 24th? Say you will and someone from our campaign will be in touch.

At these events, you’ll learn the details about our campaign strategy, and get specific instructions for the most important things you can do over the next few months to make sure that we win big in the all-important early state primaries and caucuses.

This is so important, because the tools and skills that millions of volunteers like you hone now — knocking doors, making calls, talking to our neighbors, organizing in every community in this country — are how we build power.

Now, I understand that maybe many of you have never hosted an event like this before. But not only is it critically important, it is also quite easy.

I know that you can do it, because tens of thousands of people did it successfully as part of our last campaign and thousands more have on this campaign, as well.

And shortly after you add your name to say that you will, a member of our team will reach out to make sure you have any support you need along the way.

This is the means by which we bring millions of Americans together to help transform our society.
So what do you say?

Add your name to say you’ll host a Plan to Win event during our campaign’s week of action:

Thanks for being a leader in that effort.
In solidarity,
Bernie Sanders

Let us be blunt: if we stick to a “middle ground” approach when it comes to the climate crisis, our children and grandchildren will not have a livable planet. That is why Bernie introduced what is by far and away the most bold and ambitious climate plan in this race.

Tomorrow night, he’ll talk about it during the Climate Town Hall on CNN (8:40 PM Eastern). But before he does, we want to ask you to do something to SHOW that you support his plan:

Make a contribution of ANY amount to our campaign and we will send you our brand new, limited-edition Green New Deal sticker. 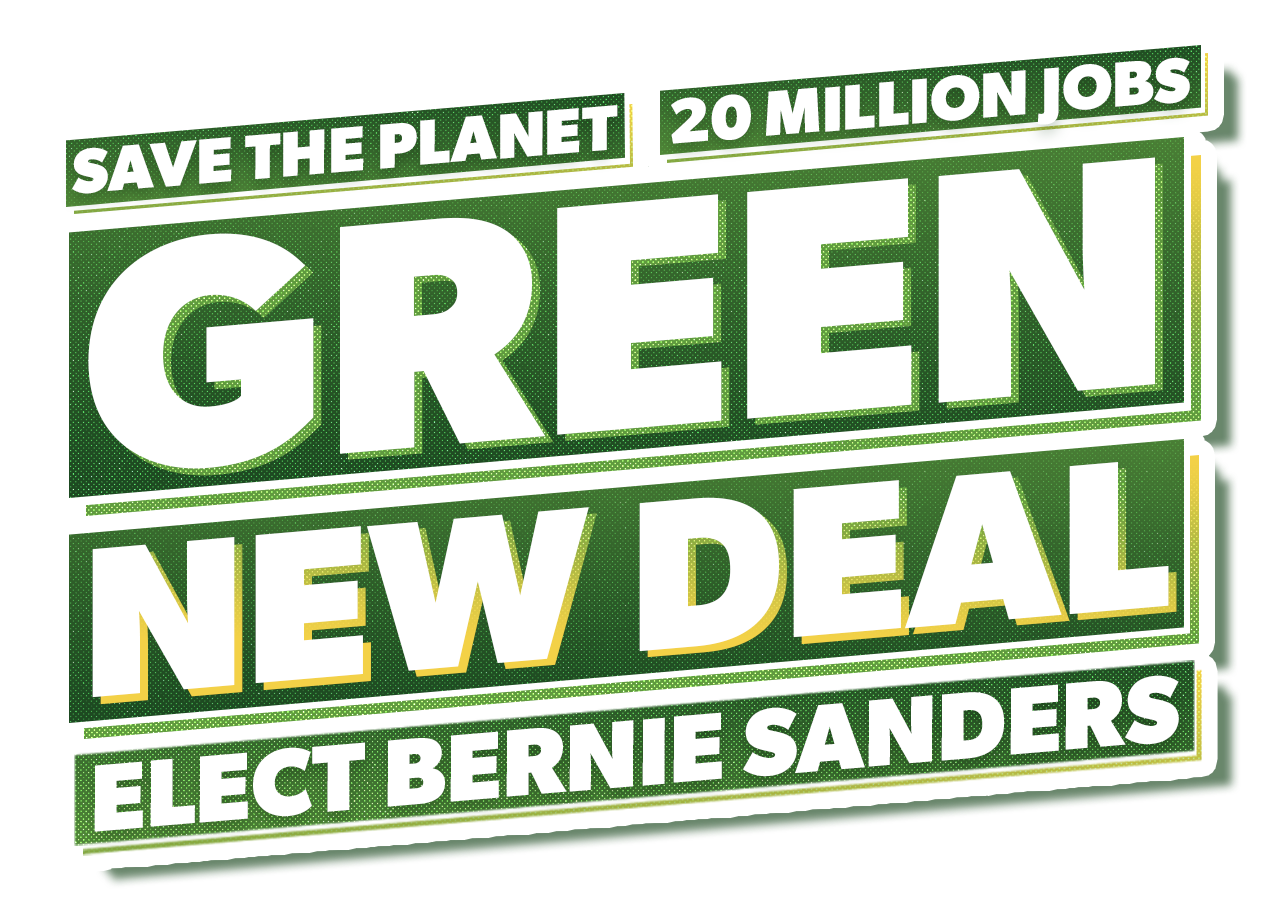 Anchorage, Alaska recently hit 90 degrees for the first time. Greenland lost 250 billion tons of ice. A city of 9 million in India is running out of water. Fires in the Amazon threaten a major source of the world’s oxygen.

And it will take a mass movement of Americans taking on the fossil fuel industry and political corruption to create the change we need. SHOW you’re in that fight.

We’ll send out our first batch of stickers after tomorrow night’s town hall. So do it now.

Tomorrow night, 10 candidates will take the stage at CNN’s Climate Town Hall, but only one of them has a plan that meets the size and scale of threats posed by our changing climate.

That candidate is Bernie Sanders.

So before these candidates take the stage, we want to ask you to do something important — something that will send a powerful message that this moment requires BOLD and AMBITIOUS action that will keep our planet habitable for future generations:

Sign our petition — say that you support Bernie Sanders’ Green New Deal before the start of tomorrow’s Climate Town Hall.

Like Bernie says, he would be lying to you if he said any of this is going to be easy.

This plan to save our planet would be difficult enough on its own. It will be even more so because of the amount of money the fossil fuel industry will spend to protect the profits they make from destroying our planet.

Thanks for making your voice heard -Here’s Bernie in the Climate Town Hall.