So Republican Trump Fixer Barr refuses to release the Mueller Report, explain why, and refuse to provide transparency in government. As if the Democrats won’t know what to do next. Well, Adam Schiff is ready to fight to make it public. Read how here.

When Attorney General William Barr submitted his four-page letter about Special Counsel Robert Mueller’s report, several House committee chairs demanded that he release the entire report, and they set a deadline of today. Now, Barr says he won’t make it — oh, and he also says he won’t commit to giving the full report to Congress at all.

The House Judiciary Committee has set a vote for tomorrow to authorize subpoenas of the full Mueller report.

Will you add your name to our petition so Congress knows the American people demand to see the full report?

Who Is This Jerk, Anyway?

If William Barr wasn’t someone on your radar before the Mueller investigation, you’re not alone. Here are four things you should know about the Attorney General — and why you should be every bit as suspicious of his four-page Mueller report summary as we are.
Make sure your name is counted before tomorrow’s vote to tell Congress: Subpoena the full Mueller report, and show us what Barr doesn’t want the public to see.
Thanks,
Need to Impeach

Last night, Donald Trump’s hand-picked attorney general, William Barr, missed the deadline set by Congress to release the full Mueller report.
That’s why tomorrow, Thursday, April 4—at nearly 300 events around the country—the Nobody Is Above the Law coalition is joining together to demand that Barr immediately release the full report and supporting evidence.
Click here to check out a map of the actions and RSVP to join a “Release the Report” event near you tomorrow, Thursday, April 4.
And if there isn’t an event near you or you can’t attend in person, you can participate in these ways:
As Rachel Maddow reported live on her show Monday night, these #ReleaseTheReport actions will be critical to getting the backs of Democratic leaders who are moving toward subpoenaing the full report and underlying evidence and pushing back against Barr and Trump’s stonewalling. 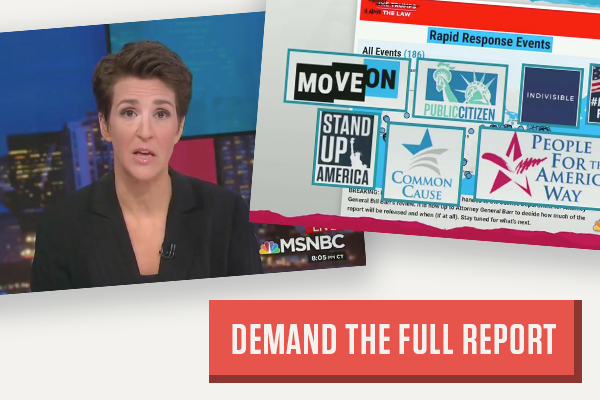 Image credit: Stand Up America
We’ll be gathering with friends and neighbors to hold signs, chant, grab local and national media attention, and amplify our demand that Barr to release the report—and that Congress to use all its power to obtain the full report if Barr fails to act.
Join us tomorrow, Thursday, April 4. Click here to check out his map and find an action near you.
Can’t make an event? Here’s how you can join us:
Since before Trump fired FBI Director James Comey to obstruct the investigation into Russia’s influence on U.S. elections, we’ve been waiting to find out exactly what happened. Now, after nearly two years and endless attacks from Trump, an almost 400-page report details everything a team of investigators has uncovered. Barr is one of the only people in the world who has seen it. We all deserve the truth. We need to come together to insist that the question is when, not whether, we learn what Mueller knows and exactly why his report “does not exonerate” Trump.
MoveOn members and allies across the Nobody Is Above the Law coalition—including Public Citizen, Indivisible, March for Truth, Stand Up America, Common Cause, People for the American Way, and others—are taking action.
Thanks for all you do.
—David, Kate A., Brian, Karine, and the rest of the team

3 Replies to “Barr Refuses Transparency-What Next?”