Bernie Sanders Has Proved That The Concept Of Small Donations Works

Bernie showed how small donations can work to counter the wealthy elite with people power. The Bernie Sanders 2020 campaign has made it up to the first primary caucuses without accepting any donations from corporate special interests. This has been, and will continue as, a true grass roots revolution. You are making this happen. The result will be the nullification of the corporate dominance in funding created by the Citizens United decision of the Supreme Court. Keep it up people!

No doubt about it, we’ve sent a number of fundraising emails about tonight’s FEC fundraising deadline  (4th Qtr. 2019) because, honestly, these notes are pretty much how we fund our campaign. 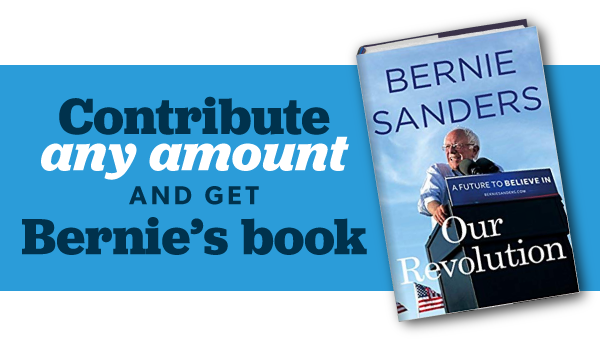 It’s amazing to think about… a Presidential campaign funded primarily via emails as opposed to fancy fundraisers, but hopefully it also illustrates why we’ve sent a number of them before this deadline.

So, when you see us start to win caucuses and primaries in a few weeks, and when you see our staff in states like Michigan, it’s these messages that make that possible.
But it also means we have to ask:

Can you add just ONE MORE contribution to our campaign? Use this link:
https://act.berniesanders.com/go/dec-deadline

Thank you in advance for your help here. We are closing in on our 5 millionth donation and hitting that goal will mean a lot to our chances to win this primary.

Earlier today, we released our fourth quarter fundraising numbers. As a donor to this campaign, we wanted to share them with you directly.

Now I want to say a few words about why this accomplishment is so extraordinary.

For far too long, the economic and political systems have been stacked against ordinary Americans. The rich get richer because they use their wealth to buy our candidates and our elections. Meanwhile, more and more working people become demoralized and choose not to participate in the political process.

What we are proving on this campaign is that one does not need to beg the wealthy and the powerful for campaign contributions in order to win elections. We are proving that when you run a campaign that speaks directly to the needs of working people and young people, they are ready to fight with you.

Also we are proving that we are far more powerful than the 1 percent have ever imagined.

We are proving how small donations work, and that is important.

Because change never happens from the top down. It always happens from the bottom up. And now is the time, more than ever before, for millions of working families, black and white, Latino, Asian and Native American, gay and straight, to come together to end the collapse of the American middle class and to make certain that our children and grandchildren are able to enjoy a quality of life and a habitable planet that brings them health, prosperity, security and joy.

Now I am proud to say that ours is the only campaign in this Democratic primary with more donations than Donald Trump.

And that is important for two reasons:

We have 5 million individual donations in a Democratic primary that hasn’t even cast its first vote yet.

Against Trump, I believe we will have 50 million individual contributions, at least. And at $27 a piece, that would be more than $1 billion. It’s absolutely obscene and outrageous that an election would cost that much money, but our campaign has proven we will be able to raise more than enough money to win. Bernie Sanders has proved that the strategy of using only small donations works.

Secondly, our donation number is important for another reason: because in order to beat Trump, we’re going to need the largest voter turnout in the history of America.

You don’t have the largest voter turnout unless you create energy and excitement.

And you don’t create energy and excitement unless you are prepared to take on the people who own America, not just beg them for money.

We need a progressive agenda that mobilizes millions and millions of Americans behind ideas like Medicare for all, raising the minimum wage, leading the world in combating climate change and more.

Now, you know that poll after poll shows we beat Trump by wide margins.

And when you combine that with the kind of grassroots enthusiasm our campaign has demonstrated the ability to generate, we will not only win this election, but we will have the organization ready to fight to transform this country.

You may remember that when I said I was going to run for President, I said that it would take a political revolution to win. A lot of people thought that was an acknowledgment of impossibility. It wasn’t.

It was a statement of what would be necessary to undo the damage that has been done to our country and reclaim our country from the oligarchs.

They will see our numbers and will no doubt ratchet up their attacks. But I have no doubt we will be ready. And that we will win.

Also, there’s one more thing that you can do to help nominate Bernie Sanders in 2020.

Can you say you’ll vote for Bernie?

Bernie Sanders has proved that the strategy of using only small donations works.

These incredible fundraising totals will help us compete against our billionaire-funded opponents, but it will be a record voter turnout that will make it possible to win. So with voting starting very soon, we need to ask:

Add your name to say you plan to support Bernie in your state’s caucus or primary. We’re aiming for a lot of signatures today to send a powerful message about the movement we’re building together.

Early voting begins in a few weeks. The Iowa caucus comes shortly after that. And it is what we do together right now that will help determine the outcome of this race. There’s never been a more important day than today to say you stand with Bernie. Thanks for adding your name.

Thank you for helping OUR campaign reach our historic milestone of more than 5 million individual donations. But with voting about to begin, we have an important question for you today:

Can Bernie Sanders count on your vote in your state’s primary or caucus?

ADD YOUR NAME IN SUPPORT

Why We Know Small Donations Work

Bernie’s Sanders is keeping pace with other candidates who got huge donations, but not from many donors. Small donations work. The future is now!

Another way to donate that is painless is to buy some campaign merchandise.

Before you go about the rest of your day, help power our fight against the billionaire class by making a contribution today.