The Bernie Base Has Undeniable Numbers

The base grass roots following supporting Bernie Sanders for President in 2020 has grown to undeniable size. Too many know and want Bernie to even overcome Joe Biden’s name recognition.
The Bernie Sanders 2020 campaign is undeniable because 2.5 million cared enough to donate.

After months of being counted out and written off by the political and media establishment of this country, a new national poll just released shows us in first place.

The momentum is undeniable. Bernie is +6 since their last poll, a bigger jump than any candidate. Help us keep it up, and we’re going to win!
What’s more, Bernie leads among young people, people without a college degree, and people of color. You should know that, and be proud of it… even if that isn’t the story the media likes to tell about our diverse coalition.

Can you make a contribution ahead of our end-of-month fundraising deadline? We have some big budget decisions to make when it ends.

Thanks for chipping in,
Faiz Shakir
Campaign Manager

Last week was a critical week for our campaign.

Over the last few days, we’ve released the most sweeping and ambitious plans of anyone in this race to fight climate change, reform our criminal justice system, and to boost workers’ rights and wages on the job.

The week ahead is a critical one, as well.

Because in just a few days, we are going to close the books on our August fundraising deadline.
And this is a big one, because it is probably the last deadline before we make some important decisions about paid advertising and state organizing plans.

Our campaign recently released a limited-edition Bernie Sanders baseball card – and this is your last chance to claim this offer before it’s gone.

Make a contribution of ANY amount and we’ll send you your very own Bernie Sanders baseball card. Most people are contributing $10 for the card – if you can give more, it’d mean a lot for our campaign. 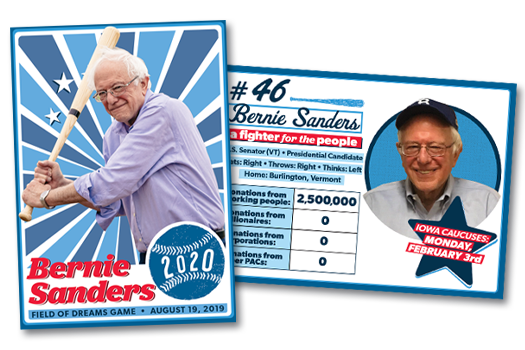 Earlier this week, Bernie and campaign staff played a softball game at the legendary Field of Dreams in Iowa.

It was a historic event, and now you can show what team you’re on with this special baseball card.

Chip in ANY amount today to get your Bernie Sanders baseball card. We’re only printing a limited number of these cards, so you’ll want to claim yours before they’re gone.

The low donation amount is obviously a source of great pride for us, but if we are going to keep pace with some of our rivals — and we must — we either need more individual contributions, or even just slightly larger donations.

Not much higher. Like, normally we ask people making their first online contribution to give $2.70. But with so many donations, even a $5 first contribution from people would put us in terrific shape.

If you watch TV or browse the internet today, there’s a decent chance you’ll see an ad from a health insurance or pharmaceutical company attacking Medicare for All. And what I want to know is why?

Why when so many Americans are dying because of a lack of insurance and more cannot afford their prescriptions, are they spending so much money on ads attacking Medicare for All? And how much do they plan to spend?

So I wrote a letter to health insurance and pharmaceutical CEOs, asking them.

Please read my letter below and add your name as a co-signer demanding answers on why they are spending so much money on ads against us when so many are suffering because of their greed.

We pay, by far, the highest prices in the world for prescription drugs and healthcare. While over 30,000 Americans die each year because they lack health insurance and one out of five Americans cannot afford the medicine prescribed by their doctors, the private healthcare industry made $100 billion in profits last year, not to make Americans well, but to make healthcare executives and wealthy stockholders richer and richer.

At a time when your profits are soaring, please tell me how many hundreds of millions of dollars the pharmaceutical industry and health insurance industry will be spending in advertising, lobbying and campaign contributions in opposition to Medicare for All.

Further, please explain to the American people why you believe it is more important to spend such an enormous sum of money on advertising, lobbying and campaign contributions than it is to make sure that no one in the wealthiest country in the world dies or goes bankrupt because they cannot afford to purchase life-saving prescription drugs or go to a doctor.

We should all be outraged at their spending during this process — and please know who they are trying to beat:

Not just me. They are trying to beat us.

So please, co-sign my letter demanding answers. Use this link:

These groups are likely prepared to spend hundreds of millions of dollars to stop us and our agenda. It’s outrageous.

Thank you for co-signing my letter, and I will let you know if they respond.

That’s how many individual donations our campaign has received so far.

It’s also a number we did not reach until shortly before the Iowa Caucus last campaign. I am very proud of that fact. You should be too.

But despite a record number of individual donations, there are still a few candidates who out-raised us last quarter, most of them relying on big checks and high-dollar fundraisers to boost their totals.

Well, we don’t do that on this campaign. This is going to be a campaign powered by working people and young people, because that is exactly who we are going to be fighting for in the White House.