What Would Bernie Sanders Propose We Do To Improve Climate Policy

There’s been a solid history of his attention to climate change policy. He has pushed and voted for every bill that involves resisting the petro-criminal industry and start green tech initiatives.

If you want a President with a plan to fight climate change that matches the size and severity of the crisis we face, there is only one candidate with a plan of that scale. That is Bernie Sanders.

Bernie has the boldest and most ambitious plan to fight climate change – the plan we NEED – but he can’t do this alone. Here’s what some are saying about Bernie’s climate plan:

Sunrise Movement: “It’s the biggest, boldest, and most ambitious plan we’ve seen so far to take on the greed of the fossil fuel billionaires, & create millions of good jobs tackling the climate crisis.”

Naomi Klein, Author and Activist: “This is what it means to treat the climate crisis like a true emergency.”

Bill McKibben, Environmentalist and Author: “The climate plan that Bernie Sanders just released is remarkable — it shows what simply must be done to meet the challenge physics has laid out.”

As one of Bernie’s biggest supporters, you don’t have to take the baseball field to be a critical part of the Bernie Sanders for President campaign team.

But today you can own the shirt worn by Bernie, Jane, and campaign staff at the iconic Field of Dreams in Iowa. Just use this link to get yours: 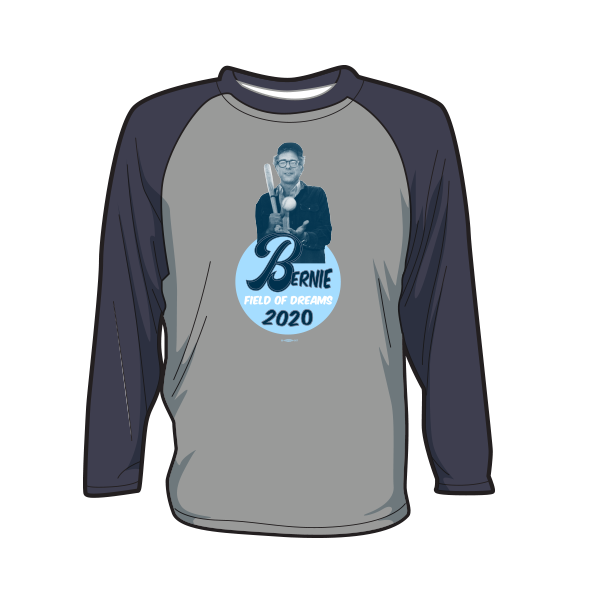 This week’s game at the Field of Dreams is an event we won’t soon forget. Now you can be a part of it as well by getting your very own t-shirt to commemorate the historic game.

Visit the official Bernie 2020 campaign store today to get your Field of Dreams jersey t-shirt. 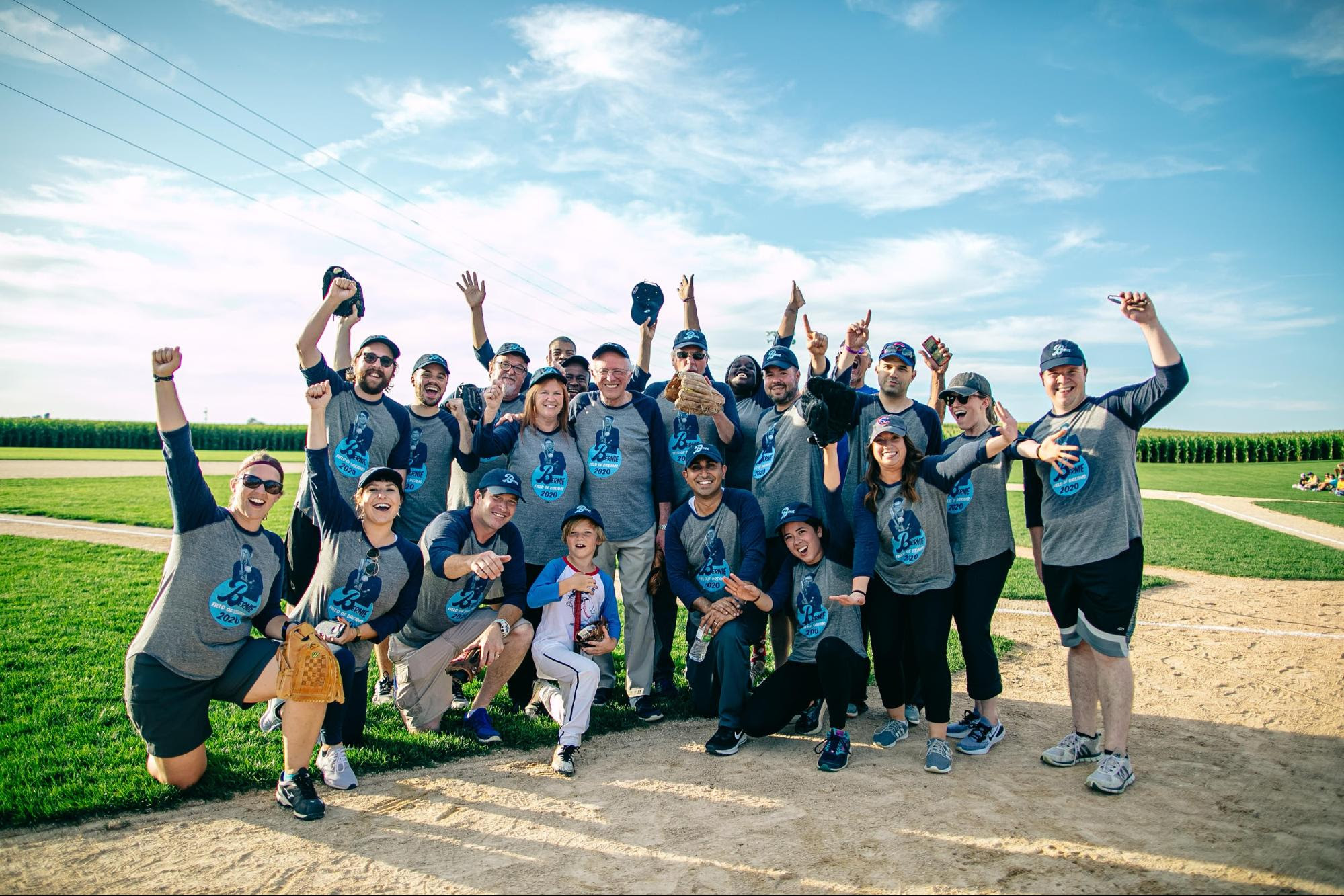 Thanks for being part of the team,

Climate change is an existential threat to our country and to the entire world. If we do not act boldly and aggressively to transform our global energy system away from fossil fuels within the next few years, there will be irreparable harm done to the planet.

That is why today we are releasing our plan for a Green New Deal. It is the most bold, progressive plan to actually confront the challenge of climate change and stop it. And I am asking for you to say you support it.

Please add your name to say your support our Green New Deal – a plan that declares climate change an emergency, and that takes bold, unprecedented action to save our planet.

Today I went to Paradise, California to see the damage inflicted less than a year ago by the devastating, climate change-fueled Camp Fire that destroyed 14,000 homes and killed 85 people.

What I saw there made clear that unless we take major action to combat climate change, what happened in Paradise will continue to happen all across the country and the planet.

Make no mistake about it. The climate crisis that we face today is similar to the enormous challenges faced by President Franklin Delano Roosevelt in 1941, when the United States was attacked at Pearl Harbor.

Faced with battling a world war on two fronts – both in the East and the West – the United States came together, and within three short years restructured the entire economy in order to win the war and defeat fascism.

As a nation and as a planet, let us stand together and boldly embrace the moral imperative of addressing the climate crisis and mobilize the political will necessary to make massive investments in sustainable energy, energy efficiency, and a transformation of our transportation system.

Today, I am proud to be releasing the most comprehensive and progressive climate change platform of any candidate running for president in the history of this country.

The Green New Deal is not going to be a way for billionaires and corporations to create even more inequality – but it will be a way for us to build an economy that works for all of us.

Let me very briefly tell you what is in this plan.

A Bernie Sanders administration will eliminate all of the fossil fuel industry’s tax breaks. We will use that revenue to make massive investments in renewable energy, energy efficiency and sustainable energy.

We will then use that revenue to meet the recommendations of climate scientists by moving to 100% renewable energy for electricity and transportation by 2030 and decarbonizing our economy by 2050.

We are also going to move to a full-employment economy and create 20 million new jobs in the process. These jobs will be good-paying, union jobs building the new electric cars and high-speed rail systems that we need, weatherizing millions of homes and buildings, rebuilding our nation’s infrastructure, and generating sustainable energy.

Ending the Greed of the Fossil Fuel Industry

When we are in the White House, the era of fossil fuel greed is over.

That means, among other things, that we will end all of the ways taxpayers currently subsidize and support the fossil fuel industry. We will immediately end all new and existing fossil fuel extraction on federal public lands. We will ban fracking and mountaintop removal coal mining.

And let me tell you something else that we are going to do. We are finally going to end the fossil fuel industry’s legal immunity.

Make no mistake about it. What the executives of Exxon Mobil and other fossil fuel executives are doing is exactly what the tobacco industry did when it lied about the health risks associated with smoking — conduct that led to federal racketeering convictions.

That is unacceptable. When I am president, I will appoint an Attorney General who will finally hold the executives at Exxon Mobil and other fossil fuel companies accountable for their criminal behavior.

Adaptation and Just Transition to the Green New Deal

That is unacceptable. Fossil fuel workers deserve a just transition. They deserve a decent job. And the communities that have been destroyed by the fossil fuel industry must be rebuilt.

We will ensure that fossil fuel workers receive a living wage, re-training, a good job and a secure pension. And we will create millions of jobs rebuilding our roads, bridges, and water systems, constructing community centers, restoring our wetlands, and substantially expanding our capacity to fight forest fires and respond to climate emergencies.

How We Will Win

I would be lying to you if I said any of this is going to be easy.

This plan to save our planet would be difficult enough on its own. It will be even more so because of the amount of money the fossil fuel industry will spend to protect the profits they make from destroying our planet. We know that we cannot allow the greed of fossil fuel billionaires to destroy our planet and our kids’ future for one second longer.

Make no mistake. Failure is not an option. Unless we take the action necessary to save our planet and reverse climate change, our children, grandchildren, and great-grandchildren are going to look back on this period in history and ask a very simple question: Where were they? Why didn’t the United States of America, the most powerful nation on earth, lead the international community in cutting greenhouse gas emissions and preventing the devastating damage that the scientific community was sure would come?

Winning this battle will be tough. But this is what I believe.

Will you stand with us today and say you support the Green New Deal?

At this point, most of the candidates in the primary have shared their plans to fight climate change.

Some believe we can find “middle ground” with Republicans and fossil fuel companies on the issue. Others take steps in the right direction, but don’t go far enough.

And then there’s Bernie Sanders.

“The biggest, boldest and most ambitious plan.” — “Simply what must be done to meet the challenge” — “This is what it means to treat the climate crisis like a true emergency.”

Many have endorsed Bernie Sanders’ plan to fight climate change, but now we need you:

Bernie Sanders was one of the first to lead on issues like a $15 minimum wage, Medicare for All and free college. Others followed.

And they followed because of you.

Now we have to do the same on the existential threat of climate change.

Add your name: tell the other candidates in this race you support Bernie’s plan — and they should too:

Thanks for making your voice heard. This is important. Especially before the climate forum coming up.