A new issues survey from Bernie 2020 and a watch party

A new issues survey for you from Bernie Sanders 2020 Campaign. Tell Bernie what issues are the most important for you, not that all the issues are important too. Which issues would you like to see focused on. Also join a webinar to get involved online and locally. Start a watch party.

If you have a minute, we’d love to get your thoughts on what issues matter to you right now.

It’s critically important to hear from you about what issues you care about on a regular basis. That’s because this is a campaign powered by all of us.

So what matters to you? Take our new issues survey now.

Here’s the way for you to include your input: 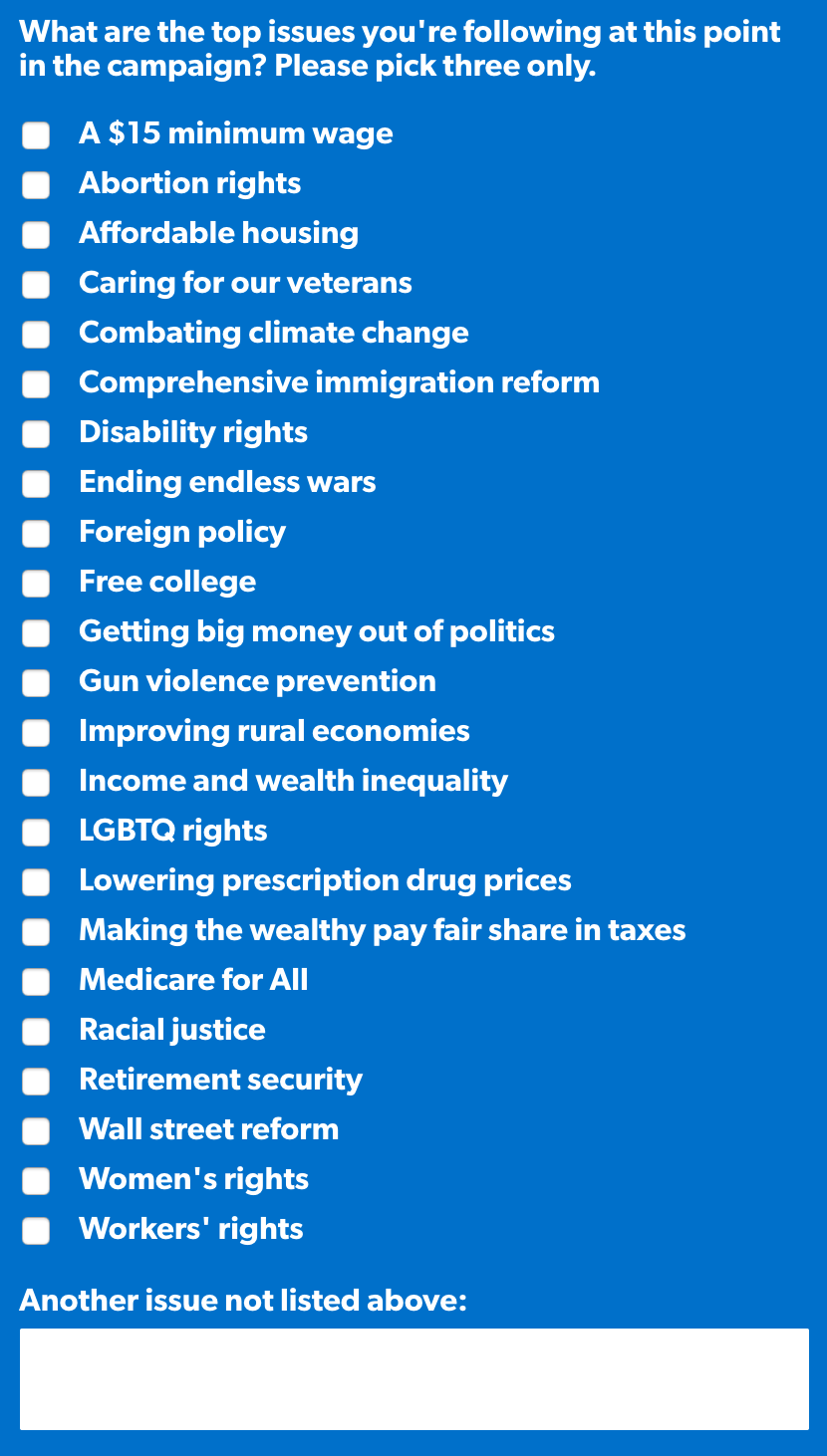 While other campaigns may prefer to hear from a room full of powerful wealthy donors about what they want, we want to know how YOU feel. We’re giving you the power because this is your campaign.

Most of the questions on these surveys are the same from month to month, because that helps us understand how your priorities change over time. So please, take a minute now to respond to our new issues survey.

Thanks for keeping us updated on what matters to you.

We are launching a powerful new part of our organizing program

An issues survey for you from Bernie Sanders 2020 -Tell Bernie what issues are the most important for you, Also, how to start a watch party

says:
Your personal story is powerful!

And sharing your story about why you support this campaign, how you got involved in the political revolution, and what type of transformational change you want to create can inspire others to do the same.

That’s why we’re launching our brand new organizing program: #MyBernieStory. Our goal is to take powerful stories like yours and have you inspire others to get involved.

The first step to empowerment can be simply to join a webinar to hear more about how you can share your personal story and be a part of this growing movement. Can you sign up for one?

This program is important to Bernie because each of us has a unique story to tell — and these stories can inspire millions of people around the country to come together and create an unprecedented grassroots movement.

More than 900 people have shared their stories so far, including Campaign Co-Chair Nina Turner. In her story, she talks about how the injustices of the health care system in this country caused her to lose her mother at a very young age.

But in order to do that, we need to organize, do surveys, and collect stories from supporters like you.

Sign up for a webinar to start sharing your powerful story:

In the power of solidarity,
Team Bernie

The low donation amount is obviously a source of great pride for us, but if we are going to keep pace with some of our powerful rivals — and we must — we either need more individual contributions, or even just slightly larger donations.

Not much higher. Like, normally we ask people making their first online contribution to give $2.70. But with so many donations, even a $5 first contribution from people has the power to put us in terrific shape.

Before you go about the rest of your day, click on the Bernie survey. Then please help add power to our fight against the billionaire class by making a contribution after you finish the survey.

Here’s an example of what Bernie is doing with your important small donations and input from Bernie’s opinion surveys. Walked on stage at a rally in Long Beach, California: And spoke to thousands of Californians who are ready to fight for economic, racial, social, and environmental justice:

Earlier in the day, he met with a huge group at an Affordable Housing Town Hall in Northridge: At the town hall, Bernie addressed the crowd standing in front of a 350-year old Torah that was recovered from Poland during the Holocaust: The day before that, Bernie held a HUGE Immigration Town Hall in Vista, California. 1,500 people attended on short notice. After the town hall, Bernie met with supporters: He even took a moment to stop by an arcade in San Diego. The trip was nothing but net: 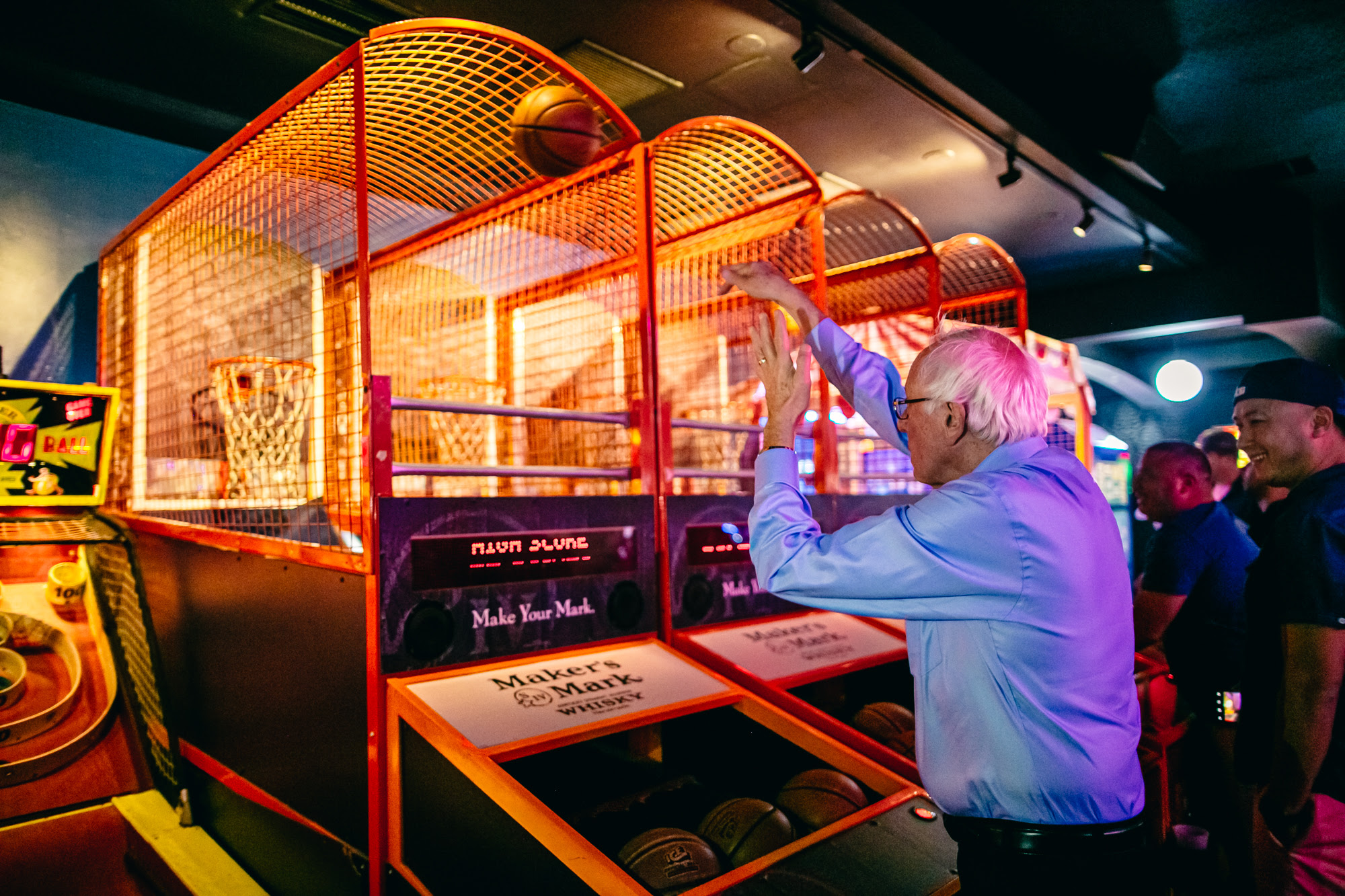 And the success of this trip is in large part because of you, James Statzer.

Tens of thousands of people just like you are building an unprecedented grassroots movement capable of electing Bernie Sanders and transforming our country.

I am proud of what this campaign is building, thank you for being a part of making it happen.