This week MoveOn.org Gave endorsements to their top candidates based on their progressive ideals and campaigning strength. 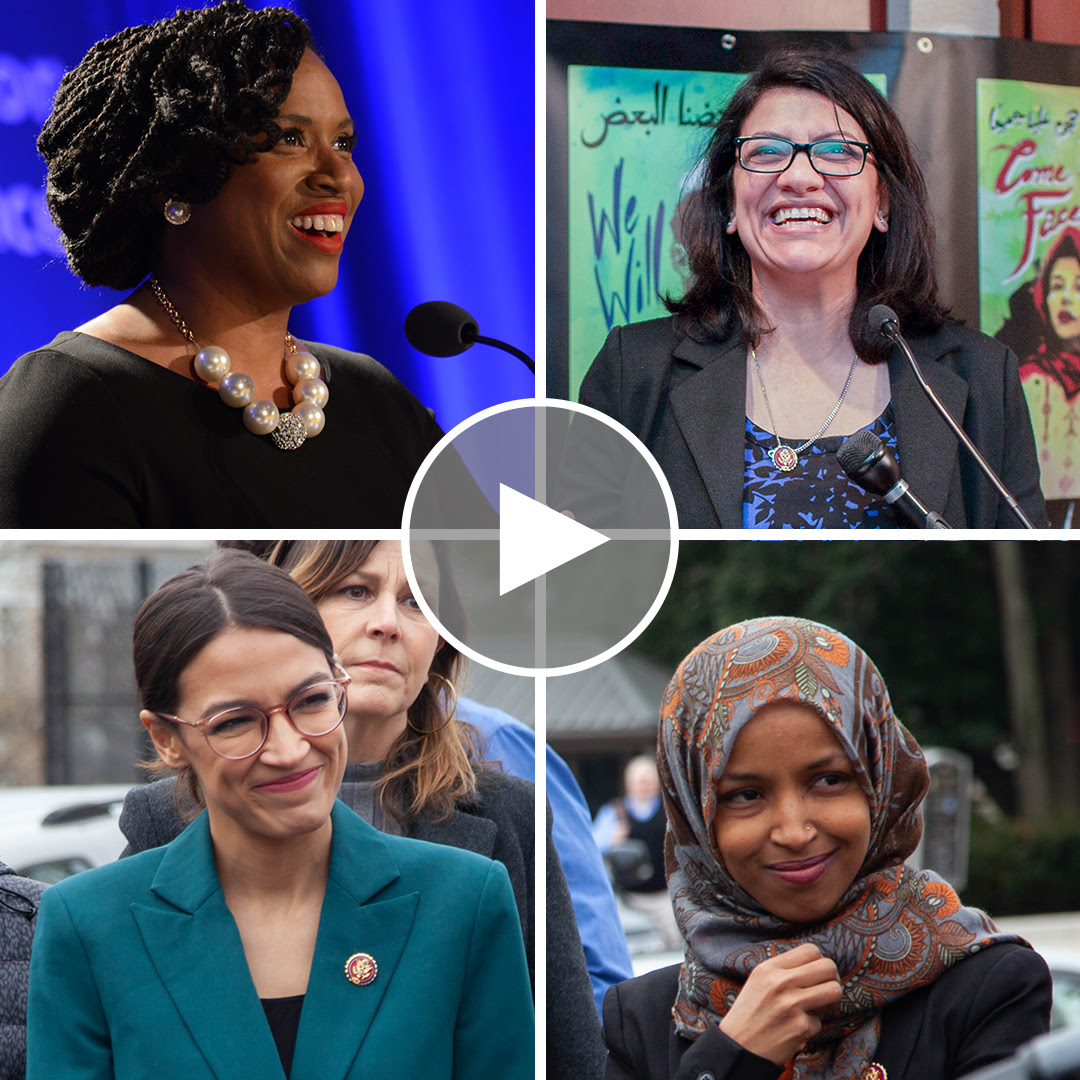 Click here for a short video about Reps. Omar, Ocasio-Cortez, Pressley, and Tlaib, how they’ve been pushing a transformational agenda, and how they’re inspiring voters across the country.
(You can also watch it on YouTube by clicking here.)
In 2019, four freshman congresswomen—all of whom won primaries in 2018 before being elected to Congress—have energized grassroots activists around the country by speaking truth to power and modeling true leadership on progressive, visionary policies.
Faced with constant attacks from Trump and the GOP, and at times silence and even derision from a number of their own Democratic colleagues, these four members of Congress have persisted in moving a progressive agenda forward and energizing voters everywhere.
All four just won overwhelming endorsements from MoveOn members in their districts, starting with Rep. Omar this past Wednesday. Their powerful style of leadership—fearless and fiercely progressive—is making a huge impact in Congress, and our early endorsement sends a strong message to Democrats: When you stand up for progressive values and truly organize to move an agenda forward, MoveOn members stand with you.
In this historic election cycle, MoveOn is committed to making sure that a progressive, inspiring, and competitive Democratic nominee who is accountable to the broader movement emerges from the presidential primaries to defeat Donald Trump.

We also recognize that electing a progressive President is not enough to build a country where everyone can thrive. That is why MoveOn plans on endorsing and electing progressive Democrats to the Senate and House to help shift the balance of power so that a progressive agenda can be enacted in 2021, while showing candidates at all levels that running on strong progressive policies is good politics.
Members of Congress such as Reps. Ocasio-Cortez, Tlaib, Pressley, and Omar are showing the exact kind of leadership that is needed for Democrats to win up and down the ticket.
Click here for a short video about Reps. Omar, Ocasio-Cortez, Pressley, and Tlaib, to learn about the transformational agenda they’ve been pushing that has been inspiring voters across the country. (You can also click here to watch it on YouTube.)
Rep. Ocasio-Cortez has championed and introduced the Green New Deal, reshaping the debate over climate change. Rep. Tlaib has emerged as a leader in calling for the impeachment of Donald Trump over his outrageous abuses of power. Rep. Pressley introduced a bill to provide back pay for the nearly 1 million federal workers who had no protections following Trump’s government shutdown. And Rep. Omar has been a force in calling for Congress to overturn Trump’s racist Muslim Ban.
Here are just a few of the quotes from fellow MoveOn members represented by these powerful leaders:

“With the Green New Deal, Ocasio-Cortez is shifting the discussion on what needs to be addressed and what is achievable if we had the political will. She is also the thing that scares Republicans most.” —Keith from Astoria, NY
“[Rep. Pressley] is an outspoken woman of color who is a strong voice for the voiceless, responds to her constituents, and is a strong advocate for the common good, justice, and peace.” —Linda from Somerville, MA
“Rashida [Tlaib] is a powerful, outspoken advocate ‘for the People’ of her district. She brings a fresh perspective to the halls of Congress and represents a progressive viewpoint held by many of her constituents.” —Theresa from Detroit, MI
“[Rep. Omar] is courageous and speaks her truth. Her identity as a woman of color, a refugee, and an immigrant is essential to bring understanding and empathy to all the multiple kinds of people who make up the citizenry of the United States. Her values reflect her constituency. I am fortunate to live in her district.” —Lauren from Minneapolis

Watch and share our short video to learn more about these four incredible members of Congress and to share with friends and family what inspiring leadership around a positive and bold progressive vision looks like. (If you’d prefer to watch it on YouTube, click here.)
We are proud to make Reps. Omar, Ocasio-Cortez, Pressley, and Tlaib our first four endorsements for 2020, and we look forward to more candidates like them who are passionate, unapologetic, visionary fighters who will represent America, stand up for their constituents, and challenge power in the halls of Congress.
Thanks for all you do.

–Rahna, Dan, Allison, Reggie, and the rest of the team

Want to support MoveOn’s work? The MoveOn community will work every moment, day by day and year by year, to resist Trump’s agenda, contain the damage, defeat hate with love, and begin the process of swinging the nation’s pendulum back toward sanity, decency, and the kind of future that we must never give up on. And to do it we need your ongoing support, now more than ever. Will you stand with us?Yes, I’ll chip in $5 a month.

Repeated here as a public service by Motiv8ionN8ion.com