This is a report on how the Bernie campaign is doing in the lead up to the Iowa Caucus. His funding with only small repeatable donations has allowed him to keep pace with the competition so far.

The huge rallies and social media buzz, (aside from the Bernie fans who wrongfully went negative against Elizabeth) shows Bernie Sanders can win in Iowa and beyond. Help with your donations, phone calling, opinion polling in the lead up to the Iowa Caucus.

Friday’s Des Moines Register Poll showing Bernie with the lead was great news. But it also puts a much bigger target on our back.

We have a ton of momentum with just three weeks to go. Now we have to finish the job. Because if we do, we will take one GIANT leap forward toward President Bernie Sanders.

Because if you think for a single second that the financial establishment of this country is going to let us win this thing without a fight, then you are sorely mistaken. They wrote us off for a long time, now we should expect everything they’ve got.

But it’s going to take EVERYTHING we have for three weeks, including a lot more donations. Because right now, we are getting outspent. So we’re asking:

Can you make a $2.70 contribution to our campaign to help Bernie win in Iowa and win this primary? Lots of people donating is the only way we will win.

Three weeks. We have come so far and are so close to getting this done. Let’s finish what we started.

Observations From My Weekend With Bernie in Iowa

I’d like to share a few observations from my weekend with Bernie in Iowa. I think you’ll find them interesting. I’m in Iowa with Bernie, traveling the state and getting ready to prepare for Tuesday’s debate. Things are going great, but we need your help:

First, I’ve seen big and energetic crowds for Bernie at every stop. I’ve also seen offices stuffed to the walls with volunteers. The enthusiasm with three weeks to go is a sight. I wish you could see it. You’d love it.

But there’s something else I’ve seen, and that is ENDLESS Pete Buttigieg television ads.

The truth is, I had seen the spending reports. We get constant updates on these things. But now I’ve seen it with my own eyes, and it’s not great.

Right now, we are getting outspent on the air in Iowa. I’ve seen the reports, and now I see it with my own eyes. And that’s largely because other campaigns can spend everything they have here and rely on super PACs or outside spending vehicles in the contests that follow.

We don’t have that luxury.

Bernie has you, and we have each other and we have to plan to win in Iowa AND plan for the long haul if we’re going to win this primary.

So we need your help to catch up, because there is too much at stake and too little time left before the caucus:

Can you make a $2.70 contribution to our campaign? We are in the lead and increasing our Iowa advertising could be what it takes to hold on and finish with a win.

Other campaigns can spend everything they have in these early states and rely on outside spending in the ones that follow. We can’t. But we have Bernie and we have each other, and that’s more than enough. So let’s keep fighting and let’s win for each other, for people we don’t even know, and for the future of our country.

Bernie Wants Your Opinion To Guide His Iowa Primary Campaign

You may remember when Bernie first ran for president in 2016 we were told that our ideas were too extreme. Some even called them “fringe.”

Guaranteeing health care for all? Too radical. Not accepting money from super PACs and the billionaire class? Too radical. Taking aggressive action against climate change? Too radical.

Now those ideas are at the center of the debate in this presidential primary. And with voting starting very soon, we want to hear which issues you care about most at this point in the race.

Take two minutes to complete our latest survey to tell us which issues are most important to you.

First, take a look at the first question: 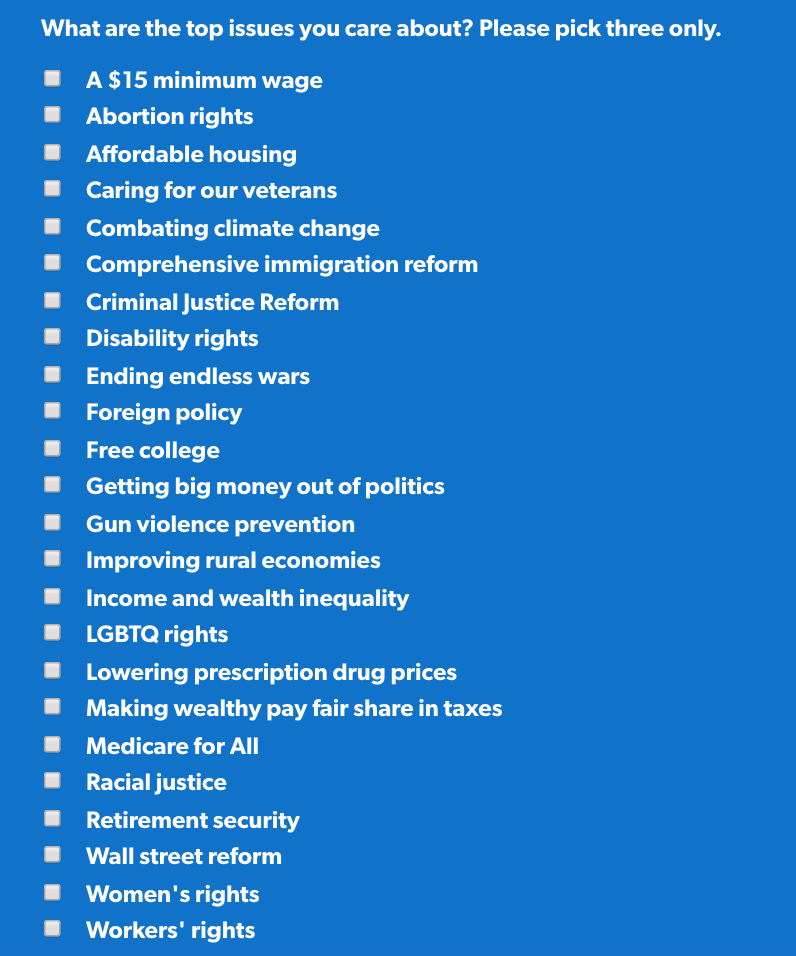 Here is the truth about our campaign: when we have a bold progressive agenda that addresses the needs of working people, one that generates energy and excitement, we bring more people into the political process.

Also, when we bring more people into the political process, we will not only win this election. We will transform this country. So as voting is set to begin, we need to hear from you directly about the issues that you care about. Your feedback is important.

Tell us which issues you care about most by taking two minutes to complete our latest issues survey.

Thanks for taking a moment to share your input today.
In solidarity,
Team Bernie

We are in the 3 week lead up to the Iowa Caucus.
Bernie Sanders is in position to win this important primary contest, unashamed to be a progressive liberal. Can you take this two-minute survey?

Do you know what it’ll take to defeat Trump and revolutionize our country?

We know that our pathway to success involves talking to hundreds of thousands of voters about why Bernie is the candidate for us. And we all have a powerful voice among voters we connect with every single day — our families, friends and communities.

Organizing in our communities allows us to take our work beyond the scope of politics as usual and into the homes of those we want to help build an America for us all. We won’t get there by just supporting Bernie or each other, but by organizing our communities to win together.

Can you take this two-minute survey to tell us more about you, so we can connect you with other Bernie supporters and help you start organizing to win in your communities?

Here are some stories about how powerful organizing our communities has been:

“This Bernie Sanders house party in Des Moines is packed. No space to stand or sit. My black brothers and sisters turned out to hear Senator Nina Turner and join the political revolution” Abshir, Iowa.

“I attended an Asian Pacific Islander Americans for Bernie Mapping Party in Arlington this evening. 2020 begins with planning and organizing” Tevita, Texas.

“We had a great kick off — 7 of us representing the American Federation of Teachers, Teamsters and UAW. We came up with 102 contacts to add to BERN!” Danielle, Detroit.

With so many active communities organizing for Bernie, take the two-minute survey now to join them and get organizing in your community!

Take The Iowa Lead Up Survey

Help with your donations, phone calling, opinion polling in the lead up to the Iowa Caucus.

Whether you’re a person of color, woman, Muslim or a veteran, there’s a group of active Bernie supporters out there waiting to be connected with you.

We’re writing to ask if you can make your next contribution to our campaign before Bernie appears at tomorrow night’s Democratic presidential debate.

Let us explain why:

Our campaign has all the momentum at the time that it matters most. And the corporate media, political establishment, and financial elite are finally recognizing what we’ve known all along: we can win this.

They’ll be watching us closely to see if our movement has what it takes to stay on a path to victory in Iowa. And one of the ways they will measure our ability to win will be based on how much we raise around the debate.

So we need a lot of donations today. Especially at this key point in the race. And especially if we’re going to keep up with our opponents who are funded by the billionaire class.

That is why we need to ask:

Can you contribute $2.70 to stand with Bernie? Help put us in a position to win this primary and show the corporate media we’re the best campaign to take on Trump.

Paid for by Bernie 2020
(not the billionaires)

Emails are such an important part of how we organize and how we raise money. In fact, there is no single greater source for our campaign’s fundraising than emails like this one. And that’s important, because no one person, not even Bernie Sanders, can take on Trump and the billionaire class alone.

This email was repeated here as a public service of Motiv8ionN8ion.com

We are in the 3 week lead up to the Iowa Caucus. Bernie Sanders is in position to win this important primary contest, unashamed to be a progressive liberal.

So please help with your donations, phone calling, opinion polling in the lead up to the Iowa Caucus.