Resistance News From MoveOn: After the Acquittal

After the Acquittal by the Republican Senate, the hope of the Right Wing is that MoveOn and other lovers of democracy and credible representation will just give up in frustration. They couldn’t be more wrong!
Now, with the acquittal of Trump, the whole Republican Party has signed off on Trump’s treason to let him escape justice on a technicality. Next step, mobilize to vote the bums out! We have had enough!

Fill out this form and we’ll send you your free “Vote Them Out” sticker. Then, please chip in to help power MoveOn’s fight to defeat Donald Trump and the GOP on November 3, 2020.

While you are there check out the Petitions tab to throw your support behind progressive activism.

Dear MoveOn member,
Well, Donald Trump gave his State of the Union address. Based on that alone it is imperative that we, the voters, make sure it is his last. He used this national air time to promote conspiracy theories, demonize immigrant and refugee communities, lie about his record, and work to demoralize Democrats and progressives while rallying his base. And he vainly bragged about his impending “total exoneration.”

But if his goal is to stamp down our energy, he has already failed. We are outraged, and we are turning that outrage into action.

The last few weeks of Trump’s impeachment trial in the Senate have thrown into sharp relief just how corrupt Trump is, and how far Republicans will go to protect him from any consequences for his criminality.
But we won’t forget their complicity in Trump’s crimes. We won’t forget their sham proceeding with no witnesses and no documents. And in November, we’ll make sure that they pay for it at the ballot box.
For the next nine months, MoveOn members and our allies will flex our muscles and build an unstoppable grassroots movement to defeat Republicans up and down the ballot, and elect Democrats to the White House, Senate, and House of Representatives.

To help spread this message far and wide, MoveOn has just printed a big batch of “Vote Them Out” stickers, and we’re giving them away for free, while supplies last.

A Response To My Impeachment Trial Letter From My Senator

I wrote my Democratic Senator about the Trump trial. I got this nice letter back. If you don’t have a letter or two like this of your own then get writing, and see how they respond.

Thank you for contacting me to share your opinion on the outcome of the impeachment trial of President Trump. I voted to convict the President on both articles of impeachment.

I am disheartened that partisanship won over the willingness to have a fair, bipartisan trial with credible witnesses and documents. Common sense says that if President Trump’s top staff members had evidence of his innocence, he would have insisted that we hear from them, as we should. Unfortunately, the exact opposite happened, which only strengthens the case presented by the House of Representatives.

I am also deeply concerned that the message being sent by this trial is that this President, and future Presidents, are above the law. That, of course, is the opposite of what should be true in our democracy. Despite the arguments put forward by the White House, in America, no President is above the law, and it is illegal to accept help from a foreign country to influence an election.

We are here because President Trump used his power as President of the United States to pressure a foreign nation to help him with his upcoming re-election. Ukraine is at war with Russia, and our ongoing military assistance is not only critical to them, but it is vital to our own nation’s security. Holding up this aid for the sake of politics was a clear abuse of power.

The vote to acquit and President Trump’s actions put our 2020 U.S. elections at even greater risk of foreign interference.

As we move forward, all of us should look for common ground on the things we care deeply about in Michigan and do our part to lessen the divide within our families and our communities. I intend to continue to focus on the issues that bring us together – protecting our Great Lakes, lowering the cost of prescription drugs, and helping create good-paying jobs. Together, we can move forward in a positive way for our families.

Thank you again for reaching out. Please continue to keep me informed about issues of concern to you and your family.

We are launching our 2020 election program and here’s how you can help us vote out as many Republicans as possible. –Rahna Epting, MoveOn Political Action

Dear MoveOn member,
Today, we are formally launching our 2020 election program: America for All. And in 270 days, together, we will defeat Donald Trump and his Republican accomplices, while electing progressive leadership that will take our country forward.

Watch and share this short video we just released about America for All.

You can watch and then please share it on YouTube, Twitter, or Facebook.
Since Donald Trump took office, his administration has relentlessly attacked and threatened communities across our country and beyond our borders, while trampling on the very foundations of our democracy. All the while, the Republican Party has stood by his side.

Trump has locked children in cages, tried to tear away our health care, condoned the rise in gun violence, rolled back our commitments to fighting climate change, and given away billions to the rich and giant corporations through his tax cuts while attacking student debt relief and food assistance for middle-class and poor people. And he’s done it while emboldening white supremacists in the streets and in the White House and advancing a white nationalist agenda.

But the last three years have also seen an awakening in this country of millions of people who believe a better world is possible and have shown they are willing to stand up for it. We’ve been part of mass people-powered demonstrations: the night after the election in 2016; at the Women’s March; at airports to protest the Muslim Ban; in the streets against family separation, gun violence, and more. We made hundreds of thousands of phone calls to Congress, showed up at town hall meetings, and organized and campaigned our hearts out successfully to prevent the repeal of the Affordable Care Act. We defended the Mueller investigation so the truth about Trump’s abuses would come out, and then secured his impeachment.

And in 2018, we fueled a massive “blue wave,” ending single-party rule in Washington and electing bold progressives up and down the ballot.

MoveOn After The Acquittal – The Time For Resistance Continues

Now, it’s time for us to take that energy, dedication, commitment, and solidarity that so many MoveOn members have shown over the past few years and translate it to the ballot box. There’s no question that Trump will be successful in turning out his base this year, in what is likely to be the highest-turnout election in American history on both sides of the aisle. But there are more people in this country who see things our way than support Trump, and if all of us work together and show up to vote, we will win, not just sending Trump packing with a resounding defeat, but winning the Senate and House with a mandate for progressive governing.
November 3 is 270 days away. And what we do over those next 270 days is critical. This is why MoveOn is investing in a massive and game-changing election program. Here’s what we’ll do:
It’s a $20 million plan to go big all over the country, especially in 10 key battleground states. Arizona, Florida, Georgia, Maine, Michigan, Nevada, New Hampshire, North Carolina, Pennsylvania, and Wisconsin. These are critical to winning the White House, flipping the Senate, and defending the critical House majority.
Trump and the GOP will have big money, the politics of hatred and division, and the power of incumbency. We also expect that Trump, knowing the Republican Senate will give him carte blanche to violate the law, will lie and cheat. They will seek to rig the election to the best of their ability.

The MoveOn After The Acquittal Strategy Is based On You!

But we have the people power! We have the power of culture and story and togetherness. And when we combine it with the best digital and mobile innovations and add high-impact applied analytics, all based in strong organizing, we can win this November. That’s what we showed in 2018 and what we’ve been showing time and again during these past three years.
That same energy that mobilized us to win on health care, take the House in a landslide with the largest midterm turnout in a century, and reach this historic moment on impeachment. That’s what we need fueling the movement over the next 270 days to vote Trump and his GOP accomplices out.
Get your free VOTE THEM OUT sticker today. There’s plenty we’ll be doing together over the next 270 days, and we want to send you a badge of pride that you’re ready for the work ahead. 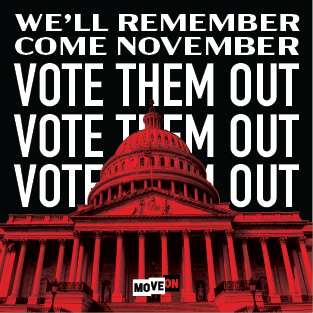 Do you want to support MoveOn’s work after the acquittal?
The MoveOn community will work every moment, day by day and year by year, to resist Trump’s agenda. To contain the damage, defeat hate with love. We will begin the process of swinging the nation’s pendulum back toward sanity, decency. The kind of future that we need. However, to do it we need your ongoing support, now more than ever. Will you stand with us?
Yes, I’ll chip in $5 a month.

PAID FOR BY MOVEON.ORG POLITICAL ACTION

http://pol.moveon.org/. Not authorized by any candidate or candidate’s committee. Repeated here gratis as a public service of Resistance.Motiv8ionN8ion.com

You’re receiving this information because you took action with MoveOn. MoveOn is where millions mobilize for a better society. One where everyone can thrive. MoveOn members are committed to an inclusive and progressive future. We envision a world marked by equality, sustainability, justice, and love. And we mobilize together to achieve it. MoveOn members are a force for social justice and political progress. We come from all 50 states and all walks of life.

Together, we are at once large and nimble, targeting our resources purposefully. Yet pivoting quickly as we identify new opportunities for change and mobilize to seize them. Our rapid-response is organizing and campaigning, communications interventions, digital innovation, rigorous data science and testing. Plus our culture of grassroots participation have repeatedly combined to produce real-world impact, changing outcomes and making our country better.